Popeye is a utility that scans live Kubernetes cluster and reports potential issues with deployed resources and configurations. It sanitizes your cluster based on what’s deployed and not what’s sitting on disk. By scanning your cluster, it detects misconfigurations and helps you to ensure that best practices are in place, thus preventing future headaches. It aims at reducing the cognitive overload one faces when operating a Kubernetes cluster in the wild. Furthermore, if your cluster employs a metric-server, it reports potential resources over/under allocations and attempts to warn you should your cluster run out of capacity.

Popeye is a readonly tool, it does not alter any of your Kubernetes resources in any way!

Popeye is available on Linux, OSX and Windows platforms.

Popeye scans your cluster for best practices and potential issues. Currently, Popeye only looks at nodes, namespaces, pods and services. More will come soon! We are hoping Kubernetes friends will pitch’in to make Popeye even better.

The aim of the sanitizers is to pick up on misconfigurations, i.e. things like port mismatches, dead or unused resources, metrics utilization, probes, container images, RBAC rules, naked resources, etc…

Popeye is not another static analysis tool. It runs and inspect Kubernetes resources on live clusters and sanitize resources as they are in the wild!

Here is a list of some of the available sanitizers:

Example to save report in working directory:

Example to save report in working directory in HTML format under the name “report.html” :

Save the report to S3

You can also save the generated report to an AWS S3 bucket with providing the flag --s3-bucket. As parameter you need to provide the name of the S3 bucket where you want to store the report. To save the report in a bucket subdirectory provide the bucket parameter as bucket/path/to/report.

Underlying the AWS Go lib is used which is handling the credential loading. For more information check out the official documentation.

Example to save report to S3:

You don’t have to build and/or install the binary to run popeye: you can just run it directly from the official docker repo on quay.io. The default command when you run the docker container is popeye, so you just need to pass whatever cli args are normally passed to popeye. To access your clusters, map your local kube config directory into the container with -v :

You can use Popeye standalone or using a spinach yaml config to tune the sanitizer. Details about the Popeye configuration file are below.

Popeye can generate sanitizer reports in a variety of formats. You can use the -o cli option and pick your poison from there.

A spinach.yml configuration file can be specified via the -f option to further configure the sanitizers. This file may specify the container utilization threshold and specific sanitizer configurations as well as resources that will be excluded from the sanitization.

NOTE: This file will change as Popeye matures!

Under the excludes key you can configure to skip certain resources, or certain checks by code. Here, resource types are indicated in a group/version/resource notation. Example: to exclude pod disruptions budgets, use the notation policy/v1beta1/poddisruptionbudgets. Note that the resource name is written in the plural form and everything is spelled in lowercase. For resources without an API group, the group part is omitted (Examples: v1/pods, v1/services, v1/configmaps).

A resource is identified by a resource kind and a fully qualified resource name, i.e. namespace/resource_name.

For example, the FQN of a pod named fred-1234 in the namespace blee will be blee/fred-1234. This provides for differentiating fred/p1 and blee/p1. For cluster wide resources, the FQN is equivalent to the name. Exclude rules can have either a straight string match or a regular expression. In the latter case the regular expression must be indicated using the rx: prefix.

NOTE! Please be careful with your regex as more resources than expected may get excluded from the report with a loose regex rule. When your cluster resources change, this could lead to a sub-optimal sanitization. Once in a while it might be a good idea to run Popeye „configless“ to make sure you will recognize any new issues that may have arisen in your clusters…

Here is an example spinach file as it stands in this release. There is a fuller eks and aks based spinach file in this repo under spinach. (BTW: for new comers into the project, might be a great way to contribute by adding cluster specific spinach file PRs…)

Popeye In Your Clusters!

Alternatively, Popeye is containerized and can be run directly in your Kubernetes clusters as a one-off or CronJob.

Here is a sample setup, please modify per your needs/wants. The manifests for this are in the k8s directory in this repo.

Popeye got your RBAC!

In order for Popeye to do his work, the signed-in user must have enough RBAC oomph to get/list the resources mentioned above.

Sample Popeye RBAC Rules (please note that those are subject to change.) 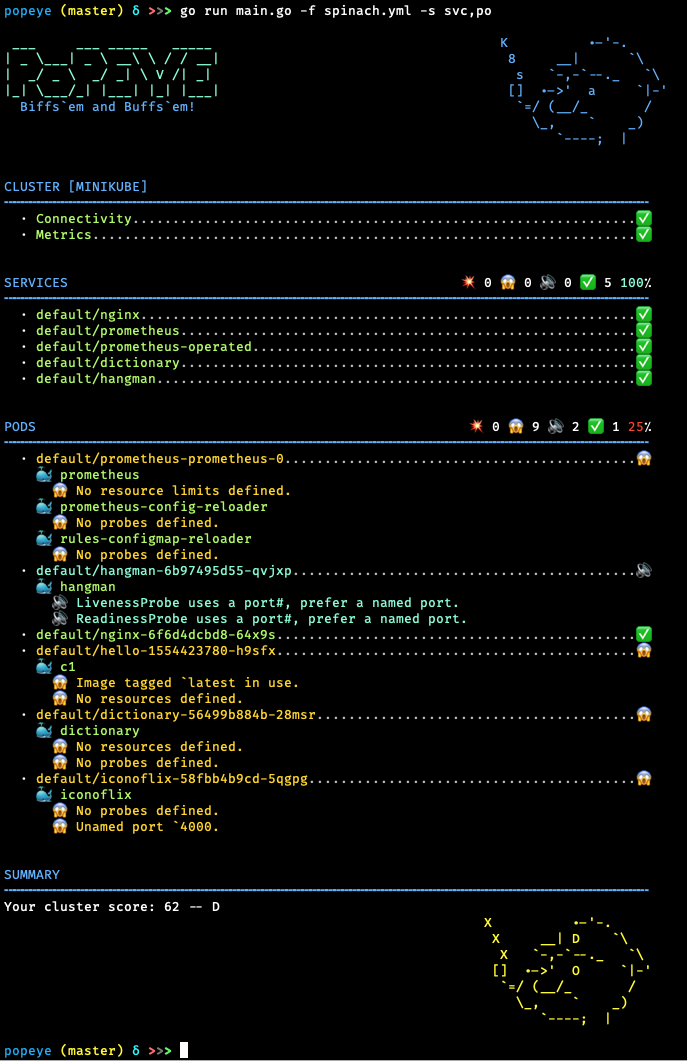 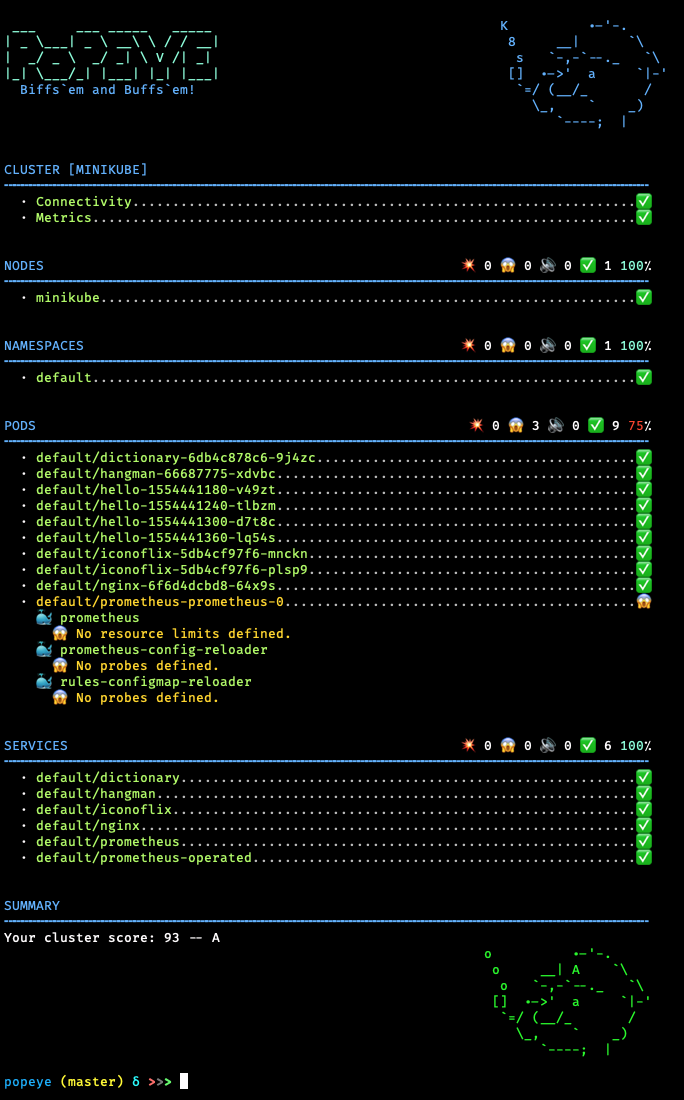 The sanitizer report outputs each resource group scanned and their potential issues. The report is color/emoji coded in term of Sanitizer severity levels:

The heading section for each scanned Kubernetes resource provides a summary count for each of the categories above.

The Summary section provides a Popeye Score based on the sanitization pass on the given cluster.

This initial drop is brittle. Popeye will most likely blow up when…

This is work in progress! If there is enough interest in the Kubernetes community, we will enhance per your recommendations/contributions. Also if you dig this effort, please let us know that too!

Popeye sits on top of many of open source projects and libraries. Our sincere appreciations to all the OSS contributors that work nights and weekends to make this project a reality!